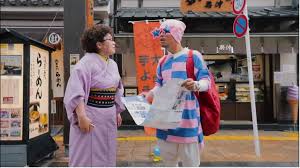 Namewee sings songs in many different languages,  one of these is a Japanese style song called Tokyo Bon, also known as Makudonarudo.  In this song, he points to the subtlety in the Japanese pronunciation of foreign words that we call “Japanglish” and he shows the Japanese love of synchronized dancing.  The video is a lot of fun to watch.

Namewee pokes fun at the way English-speaking travelers pronounce Japanese words, such as “War-kar-i-ma-shi-ta” was drawn out with distinct emphasis on each syllable, not in a way that a Japanese person would speak.  He also jokes about the way foreigners respond to Japanese people exhibiting their limited knowledge of Japanese words by speaking out only names of Japan brands such as “Canon, Hitachi, Toyota or Godzilla”; but the bulk of the song is about Japanglish.  The chorus lists a bunch of Japanglish words that are all foreign words and in katakana.

In this video, he has synchronized dancing where the Japanese women are dressed in school outfits and the older traditional robes for the Obon style dance scenes.  Namewee  has the background dancers wearing schoolgirl uniforms of a stereotypical Japanese female student.  He is pointing out that part of Japanese culture of male fantasies is to see female dancers in schoolgirl outfits.  Also Odori – which means dance was originally only performed by trained professional dancers and later became a part of the geisha life.  The music is done in the style of Bon-Odori, which is a traditional Japanese style beat.  Bon Odori (盆踊り), meaning simply Bon dance is a style of dancing performed during Obon.

According to Namewee, this song contains a wish for world peace where people from different backgrounds hold hands together, and an invitation to the largest festival of peace – Tokyo Olympics 2020.” Although we love it for the boppy music beat and the subtle statements he is making about the way people learn to speak different languages and the many subtle hints about Japanese culture.

Namewee also made a dance video in the style of a traditional dance festival,”Tokyo Bon”.